Carrie Underwood and NEEDTOBREATHE brought down the house at the 2021 CMT Music Awards.

At the Wednesday night award show, the former “American Idol” champ, 38, teamed up with the rock band to perform their song “I Wanna Remember.”

For the performance, Underwood dazzled in a sequined pantsuit complete with a large, black belt and matching shoes.

She and the rockers performed at an off-site location that featured light-colored decorative drapes hanging from the ceiling while the musicians stood in a circle and performed.

Fans were pleased with the number.

“@NEEDTOBREATHE & @carrieunderwood was absolutely jaw dropping,” gushed another. “So good!!”

Others called it “breathtaking,” “amazing” and  “so good!!!“ 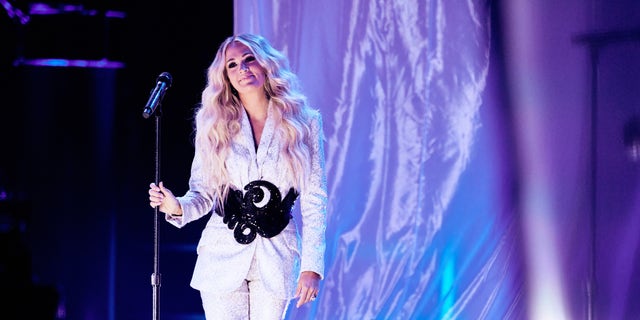 Carrie Underwood performed ‘I Wanna Remember’ with NEEDTOBREATHE at the 2021 CMT Music Awards. (Photo by John Shearer/Getty Images for CMT)

Underwood was one of four finalists to have a shot at the night’s biggest prize – video of the year. She earned the nod for her “Hallelujah” video with John Legend. She ultimately nabbed the prize.

The category initially recognizes 14 videos but is whittled down to just four finalists by showtime. Her competition for the award included Kelsea Ballerini, Kane Brown and Keith Urban, who collaborated with P!nk.

Underwood and Legend’s “Hallelujah” video also earned a nomination for collaborative video of the year, which ultimately went to Brown and Chris Young for their hit “Famous Friends.”

Maher sounds alarm on ‘climate of fear’ in US schools: Parents afraid of ‘not being woke enough’

“Real Time” host Bill Maher led a panel discussion Friday night on a subject he said he has been “taking a lot a s— for” in the past for pushing against, which is the current state of education in America.  “There is something going on in the schools. … These are the schools that funnel kids to Harvard […]

CBS says Sharon Osbourne‘s heated discussion about race, spurred by her previous support of Piers Morgan, on Wednesday’s episode of “The Talk” is now under review. “We are committed to a diverse, inclusive and respectful workplace. All matters related to the Wednesday episode of ‘The Talk’ are currently under internal review,” a spokesperson for the network told […]

Image copyright Getty Images Image caption Archie Lyndhurst with his father Nicholas and mother Lucy Smith in 2017 Actor Archie Lyndhurst’s mother has posted a poignant message remembering her “most wonderful unique son” following his death at the age of 19. The son of Only Fools and Horses star Nicholas Lyndhurst, he was known for […]