H.E.R. stole the show on Wednesday night during a performance with country music standout Chris Stapleton.

The Bay Area-native and Kentucky cowboy joined forces for a collaboration of “Hold On” that saw H.E.R. go off on a show-stopping guitar solo as Stapleton looked on in amazement – with many on Twitter praising the pair for a performance well-delivered.

Following the performance, social media couldn’t contain their excitement at witnessing the crossover range displayed by the two superstars.

“The talent that we just witnessed inside these four walls has us speechless and covered in chills. @ChrisStapleton @HERMusicx #CMTAwards,” the official account for Bridgestone Arena, where the two performed, wrote.

Other at-home viewers raved “it was worth watching half the CMT awards just to see H.E.R perform with Chris Stapleton.”

One Twitter user even threw on their artist and repertoire and asked “so how do we get a duets album with Chris Stapleton and HER?”

“Two great performances back to back: Chris Stapleton and HER, then the amazing Carrie Underwood and NeedToBreathe,” wrote another viewer, who added, “Now THAT’S more like it!”

“Her and Chris Stapleton was one of the best performance’s of the night!” chimed another social media user.

Stapleton also gave a solo effort of “Arkansas,” a performance he gave from a Nashville farm. 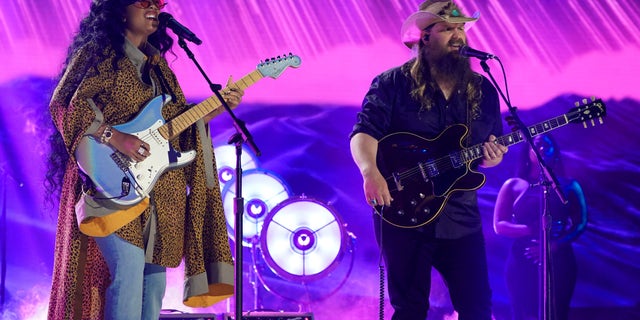 H.E.R. and Chris Stapleton perform onstage for the 2021 CMT Music Awards at Bridgestone Arena on June 09, 2021 in Nashville, Tennessee.  (Photo by Erika Goldring/Getty Images for CMT)

Other performances throughout the star-studded night included the trio of Lady A, who were joined onstage by Carly Pearce and Lindsay Ell.

Meanwhile, hosts Kane Brown and Kelsea Ballerini also graced the stage and Hailey Whitters then took the stage to sing her hit “Fillin’ My Cup.”

Country queen Miranda Lambert also performed a version of her hit “Tequila Does” around a campfire alongside Jon Randall and Jack Ingram.

Luke Bryan also rocked the house with his hit, “Down to One.”

Both Maren Morris and Barrett were originally set to perform at the CMT Awards but backed out.

The show closed out with a performance of “Famous Friends” by Brown and Chris Young.

U.S. District Judge Ann Donnelly has ordered a rare hearing to determine whether R&B star R. Kelly‘s attorneys have conflicts of interest. According to the Chicago Tribune, the hearing is scheduled for Thursday. Fox News previously confirmed that two of the singer’s attorneys requested to withdraw themselves from counsel. Mike Leonard and Steven Greenberg sent a […]

Image copyright PA/BBC Image caption Grande’s new album was released the day after Franklin died Ariana Grande has topped the UK album chart in a week that saw three Aretha Franklin albums re-enter the Top 40. Grande said she was “so grateful” to score her second UK number one album with Sweetener, which sold 45,000 […]

Image copyright PA Image caption Milkman tells a story based during the Troubles Belfast-born author Anna Burns has seen sales of her Man Booker Prize-winning novel Milkman grow by ”more than 1,000%” since being shortlisted. The book’s publisher Faber has printed up to 100,000 copies since the award was presented on Tuesday night. By Friday […]