In a release detailing the news, NASA wrote Tuesday that the pak choi had grown for so long that it began to flower as part of its reproduction cycle.

In an interview with Fox News on Thursday, the space center’s Matthew Romeyn said Amara is nutrient-rich and pak choi — which was selected by middle school and high school students as part of the Growing Beyond Earth program — is “bio-efficient.” 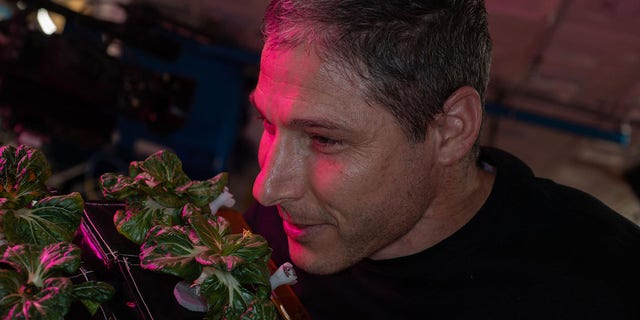 NASA astronaut and Expedition 64 flight engineer Michael Hopkins smells ‘Extra Dwarf’ pak choi plants growing aboard the International Space Station on March 26, 2021. The plants were grown for the Veggie study, which is exploring space agriculture as a way to sustain astronauts on future missions to the Moon or Mars. (NASA)

Part of the experiment they were conducting included a taste test of their crops and space center colleague Dr. Gioia Massa said that their team was also collecting the human and organoleptic data as well

“So, you know, [during] this experiment we also were collecting the human data, both in terms of behavioral health like psychological surveys — How do the plants make people feel? How do they enjoy them in that environment? — and taste test data, organoleptic data,” she explained. “So, we don’t have those results complete yet, but you know, we did get great feedback from the crew that they really liked to eat the crops and, you know, also enjoyed growing them and like smelling them.”

“Delicious, plus the texture or crunch,” Hopkins wrote in experiment notes after sampling the Amara. 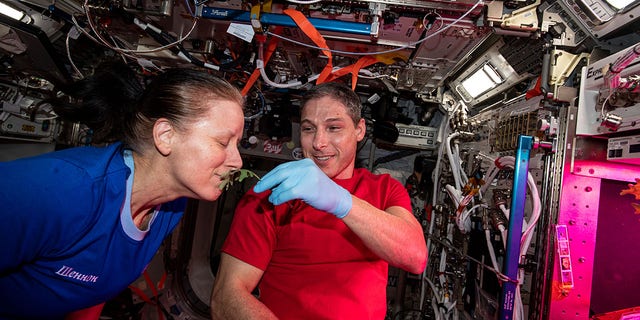 NASA astronauts Shannon Walker and Michael Hopkins collect leaf samples from plants growing inside the European Columbus laboratory on January 28, 2021. Space agriculture is key to the success and sustainability of future human missions to the Moon, Mars and beyond. (NASA)

“And so, we plant them on the ground, for the most part. We fill them up with a baked clay and a slowly-controlled release fertilizer and it’s all dry and we glue pieces to wick where they can, you know, be supported and then germinate,” she continued.

Some of the plants have lasted up to 2 and a half years on the ISS.

In the absence of gravity, plants use light from LEDs and other environmental factors to guide growth. 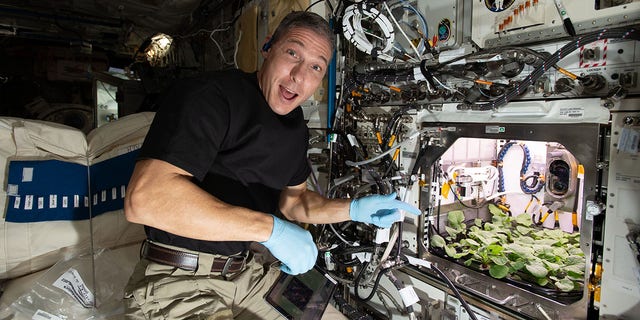 Michael Hopkins welcomes in the new year by preparing to harvest radishes for Plant Habitat-02 on December 27, 2020. Radishes are one of several options being investigated as potential food sources to sustain future long-duration missions. The Crew-1 astronauts were also involved in Food Physiology experiments evaluating an enhanced spaceflight diet on their immune systems and gut microbiomes. (NASA)

Hopkins would install plant pillows in the Veggie growth chambers, strap them in with a bungee cord, add water and separate the wick after three days to help the seedling emerge.

Any weaker crops would be removed or transplanted and then the astronaut would monitor them for around a month before it became time to harvest from them.

Massa said that some of the leaves were sampled for science and will return to their team at KSC for nutrient analysis and food safety microbiology analysis.

Hopkins also inventively used a small paintbrush that another crew member had brought up as a personal item to pollinate plant flowers — an important process for the future introduction of fruit crops.

The Kennedy center will send chile pepper seeds to the space station later this year as part of the Plant Habitat-04 experiment on SpaceX’s 22nd Commercial Resupply Services mission to grow in the Advanced Plant Habitat and another experiment with dwarf tomatoes is slated for next year. 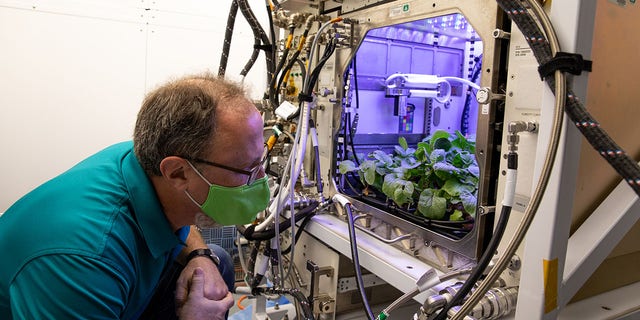 Dave Reed, Florida operations director for Techshot, Inc., observes radishes growing in the Advanced Plant Habitat (APH) ground unit inside the Space Station Processing Facility at NASA’s Kennedy Space Center in Florida on Dec. 14, 2020. The radishes are a ground control crop for the Plant Habitat-02 (PH-02) experiment, which also involves growing two similar radish crops inside the International Space Station’s APH. NASA astronaut Kate Rubins harvested the first crop on Nov. 30, and the second harvest aboard the orbiting laboratory is planned for Dec. 30. Once samples return to Earth, researchers will compare those grown in space to the radishes grown here on Earth to better understand how microgravity affects plant growth.

“And, you know, that brings a whole different set of challenges,” Romeyn pointed out. “You have the long duration growth cycle, you know, 120 days versus 30 to 60 [for] the leafy green. You’ve got a flowering cycle, freeze cycle, then get the challenge of kind of getting the flavor the preferred way you want [it] to be.”

The team has already grown several types of leafy greens and radishes and are looking at legumes. Soybeans and wheat would require extra equipment.

That said, although astronauts’ pre-packaged and freeze-dried food offers variety and nutrition, fresh crops make for an appealing addition.

Like NASA’s spaceflight program, the team is preparing for future exploration.

The agency’s plans are, through the Artemis Program, to land the first woman and next man of the moon by 2024 and establish a sustained presence there by 2028.

“So, I think — you know — we’re trying to collect these data because we need to figure out long-term you know when we send astronauts to the moon and to Mars, what kind of plant growth systems will be needed,” Massa told Fox News. “So, we were able to add these two crops to our success stories of crops that can be grown well in space, and they collected a lot more data on that.”

“Our real driving force right now is to enable a Mars mission; we need to have the ability to supplement that diet and to have fresh bioavailable nutrients from … food that you can grow yourself,” she said. “So, we think there [are] going to be a lot of roles for plants in the future of space exploration.”

After six months in space, Hopkins and Noguchi are slated to return to Earth Saturday night aboard the Crew-1 Dragon spacecraft “Resilience,” which will undock from the ISS at 8:35 p.m. ET.

Image copyright Reuters Data harvesting and sharing by mobile apps is “out of control”, University of Oxford researchers have warned. Nearly 90% of free apps on the Google Play store share data with Google parent company Alphabet, the Financial Times reported. Google said it had clear policies for how developers could handle data, and that […]

Toshiba shuts the lid on laptops after 35 years

Image copyright YOSHIKAZU TSUNO Image caption Toshiba was once proud of its laptops – this was the unveiling of the Qosmio in 2004 The Japanese giant Toshiba has sold its final stake in the personal computer maker Dynabook. It means the firm no longer has a connection with making PCs or laptops. Sharp bought 80% […]