The first solar eclipse of 2021 will be visible to the Northern Hemisphere on Thursday morning.

It will appear as a “sunrise event,” with the moon passing between the Earth and the sun and partially obscuring the star from view and leaving its outer ring exposed.

The annular “ring of fire” eclipse will be best viewed by residents of parts of Canada, Greenland and northern Russia, according to NASA.

However, in the eastern U.S. and northern Alaska, a partial solar eclipse – without the annulus or “ring of fire” – will occur, appearing as if the moon has taken a “bite” out of the sun.

Much of Canada and parts of the Caribbean, Europe, Asia, and northern Africa will also only see a partial eclipse.

Livestreams for the event begin in the early morning and viewers in the eastern U.S. are advised to get a clear view of the eastern horizon to observe it. 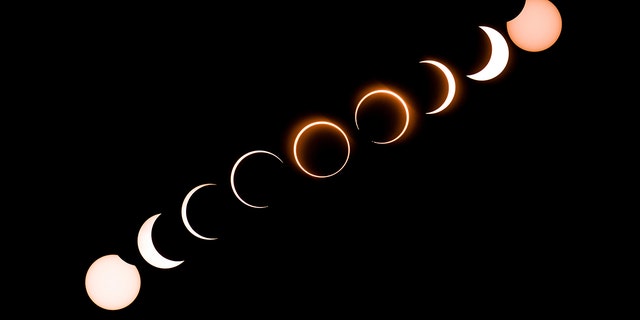 TOPSHOT – This composite image shows the moon as it moves in front of the sun in a rare “ring of fire” solar eclipse as seen from Tanjung Piai in Malaysia on December 26, 2019. (Photo by Sadiq ASYRAF / AFP) (Photo by SADIQ ASYRAF/AFP via Getty Images)

NASA also cautions that the use of special eclipse glasses will be necessary to avoid the threat of blindness.

The event will last for around an hour and 40 minutes, according to EarthSky, with the “ring of fire” phase lasting almost four minutes at every point along the annual solar eclipse path.

The outlet noted that northerly and easterly locations would see a deeper and longer partial eclipse, lasting for more than an hour over New York City at a magnitude of 80%.

Space.com said that the maximum eclipse over the Big Apple would happen at 5:32 a.m. ET.

If the weather does not permit a shot of the eclipse or interested parties live in an area without a clear view, the next and final solar eclipse of the year will take place on Dec. 4, with totality only visible from Antarctica and southern Africa.

NASA will start video coverage on YouTube at 5 a.m. ET and the Italy-based Virtual Telescope will also stream the event at the same time.

Image copyright Eyevine/New York Times Image caption Evelyn Berezin said her word processor would help secretaries become more efficient at their jobs The woman who created and sold what many recognise as the world’s first word processor has died aged 93. Evelyn Berezin called the device the Data Secretary when, in 1971, her company Redactron […]

Image copyright Getty Images Image caption Which? said consumers had been let down by false speed claims for broadband services Which? says many UK households get half the broadband speed they pay for. Customers on a 38Mbps service received average speeds of 19Mbps, according to its findings, taken from 235,000 uses of its broadband speed […]

The famous Steamboat geyser in Yellowstone National Park won’t foretell a major volcanic eruption, according to scientists. The geyser in the Norris Geyser basin shoots water more than 300 feet into the air during its major eruptions. Steamboat, which is the world’s tallest active geyser, reawakened with prolific eruptions in 2018 after 34 years of sporadic […]